A little history of the Nameless Festival 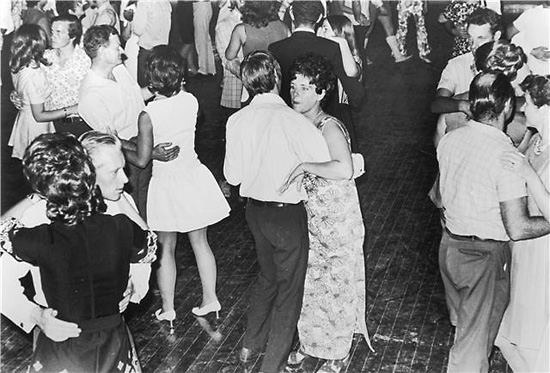 The Nameless Festival began in 1969 as a one-day show made up entirely of novelty events then progressed in the late ’70s to a weeklong event. Events included a Teen Dance on the Friday night, a 2-day shoot, the Right Royal Ball, with the crowning of the Nameless Queen. Throughout the week there were quizzes, a music hall, art exhibitions, fireworks displays, Mardi gras, Beer Festival, pet show, speedway, dances and sporting events. On Monday (August 1 Hamersley Iron Holiday) Nameless Day was celebrated on the main oval with a festival of party foods, show bags, pony rides, a fun parlour, chocolate wheel, fortune telling, auction etc. 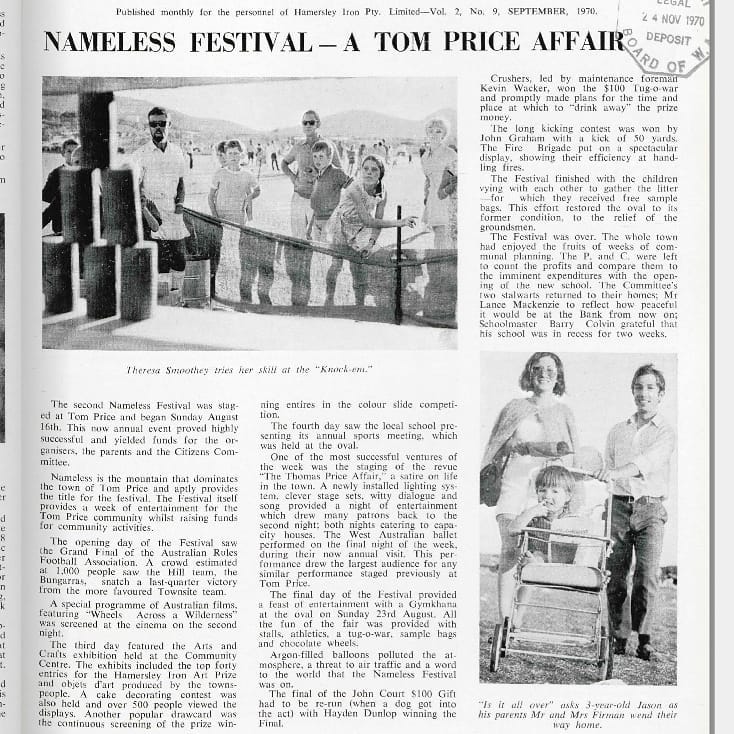 In the Eighties there was an open-air concert with Lee Conway, wood chopping and axe throwing competitions, with State and National titleholders in attendance. A Mardi Gras, bottomless boat races (Nameless Regatta) inter-town Tug-o-War with Paraburdoo, world record rolling pin throw, an inaugural truck pull challenge, teams pitting their strength against a 170 tonne Unit Rig Haul truck and a mini-Olympics which defies description!

The Nineties saw 2 years in a row, the Great Camel Race staged in front of a very large audience – four camels raced five circuits of a course around the rugby oval. In’91 the huge Unit Rig MT4000 was introduced to the truck pull, with great results. Hamersley Iron put on a spectacular two-stage fireworks display to celebrate the Nameless Festival turning 21, and also 25 years of operation for Hamersley Iron in the Pilbara. ’94 saw the Queen Quest return. In later years there were the Police Pipe Band, skydivers, fly-over by the Air force (the pilots came to the Black & White Ball in their boxer shorts, white shirts and jackets). There was a Medieval Ball and a Wild West Ball with some great costumes.

In 1999, the last year of the century, there was a return of the truck pull, a full oval, Doopa Dog from GWN visited, there was a climbing wall for those height gurus, and iron ore throw, performing arts competition, a dog & owner look-alike competition, cash ‘n’carry auction and the Wild West Ball, with many colourful characters such as Wild Bill, Maverick, dancing girls, madams, and genteel ladies.

The past few years have seen more of the same wonderful Festival events with amazing Street Parade floats that embraced the theme of the Festival, Talent shows, art exhibitions, and amazing entertainment including Bad Piper in 2010 with fire playing bagpipes.

In 2011 we celebrated 40 years of the festival. The Festival added the aboriginal name Jarndunmunha and is now called the Nameless Jarnndumunha Festival. The week started with a black tie ball with Ian Ireland piping in the 40th Anniversary cake, which was cut by a Festival past president Stephen Rice and Rio Tinto General Manager Mick Green. We had art workshops at the schools and festival weekend, face painting, Rock Wall climbing, Motor X show, local artists and performers, Street Parade, Arty Brelleas, fireworks and a dog show to name a few. The concert on the Saturday night saw Stone Circle open followed by DIESEL. The 40 years was celebrated in style and enjoyed by all.

The Festival continued going from strength to strength from 2012 to 2018 with special guests performers such as Shannon Noll, Reece Mastin, Potbelleez and more. We expanded the Festival to include the TP Factor, The Dog Show and Grease, Gears and Grills as well as our Festival favourites Street Parade and Fireworks. When the Clem Thompson Sports Oval was upgraded, we held the Festival for two years in the town centre, before returning back to the Sports Oval in 2017, and the Street Parade returning to kicking off at Lion’s Park and down Stadium Road.

To all those committee members and volunteers that have helped over the years and are with us currently, thank you for your enthusiasm and for making the Festivals and the Balls happen. To all the businesses and sporting groups in the Tom Price community who over the years have provided sponsorship, financial or in-kind – thank you, we cannot make this event happen without you.